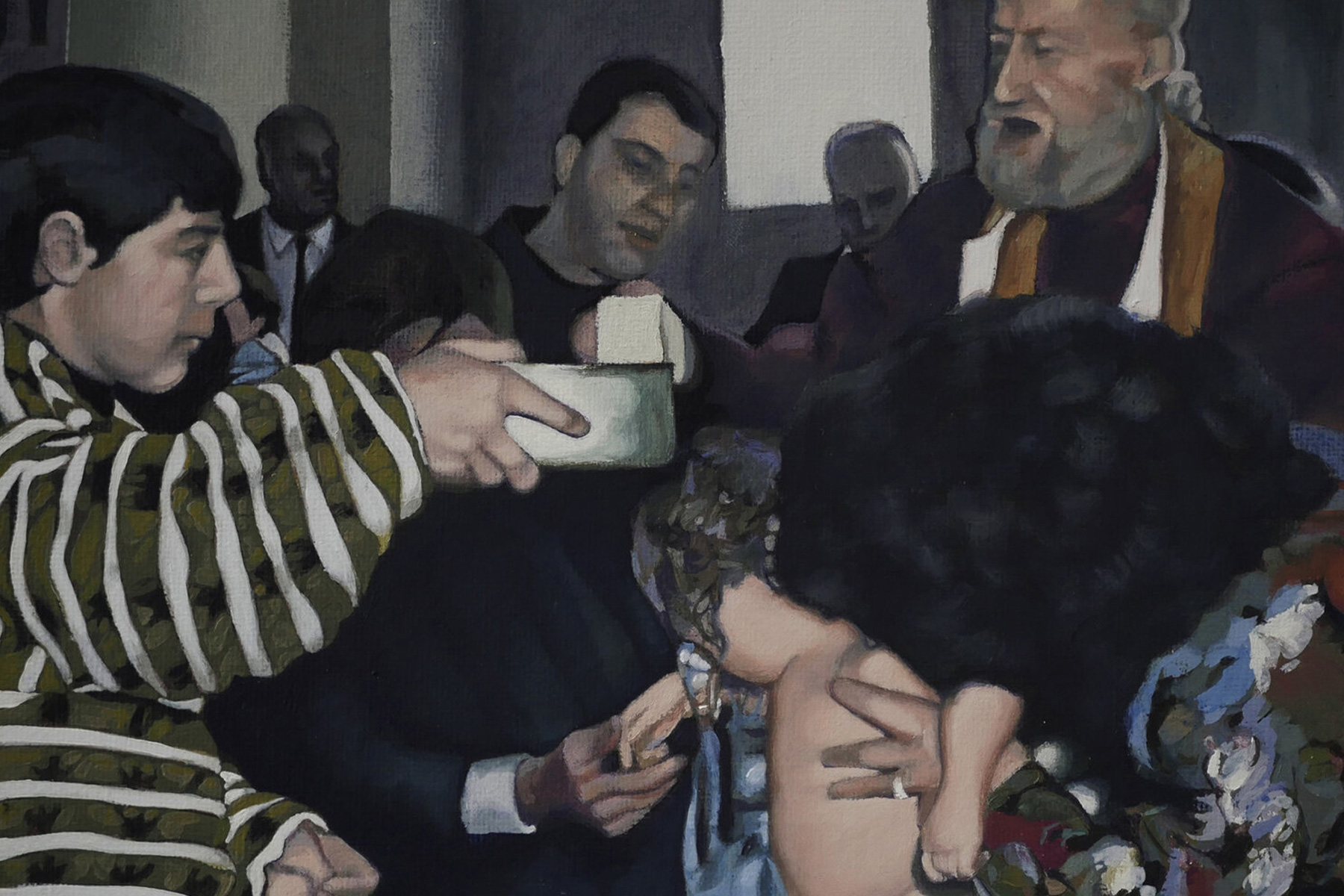 Not Quite Nearly Fine, curated by Giulio Squillacciotti, is the first of two exhibitions proposed for the 2021 Summer Show. The path is articulated around the theme of language. As the artist himself says, “A series of narrative devices stages possible conversations-happened or not, metaphorical or literal-constructed from communication systems for which there was no vocabulary. Not Quite Nearly Fine -literally: “not close enough to good,” a definition borrowed from antiquarian market terminology to describe the quality and state of preservation of an antique book-through the works of Anne Huijnen, Artun Alaska Arasli, Ben Weir, Daniel de Paula, Giulio Squillacciotti, Marie Claire Krell, Marwan Moujaes, and Nour Mobarak, tells of possible translations, conditions of identity, attempts and failures of interpersonal situations and relationships. About what was and how we remember it, what remains and how we adapted it, what can still happen and how we imagine it.” The exhibition revolves around the concept of the scenography of language, of the unspoken, of the conveyance of identity, and stages the possible translation of events, historical situations, urbanism, and personal moments as macro themes.

The exhibition unfolds through an itinerary that accompanies the visitor among objects, moving images, materials, voices and hyperrealist presences that build a landscape of residues, gazes that search, memories to be recovered, transient identities.  A series of publications related to the themes addressed are also planned throughout the exhibition. The exhibition opens on Monday, June 14, and will end on July 28.

The Baruchello Foundation presents a talk on the theme of language and translation, as part of the exhibition Not Quite Nearly Fine curated by Giulio Squillacciotti. Speakers will include Umberto Cini, interpreter-translator for the Chamber of Deputies, Marina Lalović, Rainews24 journalist, and Tijana Mamula, director and writer.

Umberto Cini’s talk is focused on the contrast between the opposite poles of the “curse of Babel” and biodiversity, of the multiple as a punishment and as a value; Marina Lalović, starting from her personal history, is focused on the issue of identities and strong emigrations from the Balkan region, themes present in her book La cicala di Belgrado (Bottega Errante Edizioni, 2021); Tijana Mamula’s contribution is on the work of literary adaptation for film, the focus of her recent research, her experience as a translator, and the role of the filmmaker in relation to the potential and limitations of spoken and written language.

Umberto Cini (Livorno 1957), after studying at the city’s classical high school, was admitted to the literature class of the Scuola Normale in Pisa in 1976. Graduating with a thesis on Leopardi prosatore, he moved to Thessaloniki, where he taught Italian language and literature for two years. From there his knowledge of modern Greek and other languages took him to Brussels, where for sixteen years he worked as a simultaneous interpreter for European institutions. In 1999, having passed into the service of the Chamber of Deputies, he settled in Rome where he still resides. A scholar of Greek and Mediterranean political, historical and literary topics, on which he occasionally publishes articles and essays, he is currently organizing an international conference on the Greek merchant community of Livorno to be held in his hometown in October.

Marina Lalović (Belgrade, former Yugoslavia, 1981) is a Serbian journalist. In 2000 she moved to Italy where she graduated from Sapienza University of Rome in Publishing and Journalism. She worked as an editor at Babel TV’s (Sky channel 141) weekly magazine dedicated to immigration issues in Italy. She has been a correspondent from Rome for the Serbian daily “Politika” as well as for the Serbian radio-television station, B92. She is currently part of the foreign editorial staff of Rainews24 and collaborates with Radio Rai 3.

Tijana Mamula is a Serbian-Italian director, writer and translator based in the UK. Her deeply intermedial work focuses on processes of adaptation and contamination between film, photography, literature and theory. Her short films include an experimental trilogy on the Jasenovac concentration camp and its echoes in the present (Cousins, Nightflowers and Ada, or); the documentary Obrenovac Under Water; the existential noir A Happy Death, based on some of the works of Albert Camus; and The Writing Box, a post-post-colonial fantasy. She has also directed music videos and made the well-known supercut Homophobic Friends. As an author, she has published the books Cinema and Language Loss (Routledge, 2012) and The Multilingual Screen (Bloomsbury, 2016), both devoted to the relationship between language and cinema and the impact of multilingualism on film aesthetics. She is currently engaged in a new doctoral program at Newcastle University, in which she explores the philosophical potential of literary adaptation.

Not Quite Nearly Fine is the first exhibition of the Summer Show 2021 project, now in its fifth year, which will be followed by A Season in Slemani curated by Carlo Gabriele Tribbioli.

With the exhibitions Not Quite Nearly Fine and A Season in Slemani, Fondazione Baruchello inaugurates the fifth edition of the Summer Show project, this year organized as part of the “Estate Romana 2021.”  For this edition, two artists, Giulio Squillacciotti and Carlo Gabriele Tribbioli, were invited to each conceive and curate an exhibition.

Not Quite Nearly Fine and A Season in Slemani are conceived as two stages of the same exhibition itinerary, presenting works by national and international artists between the months of June and October at the Baruchello Foundation, focusing around two different conceptual cores.

The choice of the artist in the role of curator stems from the desire to present projects that have involved other artists, curators, graphic designers and publishers in a novel way such as to produce a broader and more inclusive situation that presents an exhibition as an artistic program. Different forms of landscape and travel (urban, interior, individual, collective) between realities and possible new reconfigurations of the same, constitute the starting points of this project conceived in a period that has seen limited mobility for many.  These are themes that lead to the investigation of geographies, cultural politics and cultures, transnational relations and displacements both real and mental within a broad reconnaissance of possibilities for thinking about and interacting with the cultural other. Within this theme, the scope of possibilities is very broad and includes: the relationship to the current crisis, imagination as a resource, activism and public space, forms of reconfiguration of landscape and intercultural relations between language and translation.

Admission will be limited.

The Summer Show project, promoted by Roma Culture, is a winner of the Public Notice Estate Romana 2020-2021-2022 curated by the Department of Cultural Activities and is implemented in collaboration with SIAE.

The Fondazione Baruchello has sponsored four publications related to the exhibition “Not Quite Nearly Fine.” The four texts by Àngels Miralda, Artun Alaska Arasli, Ben Weir and Marwan Moujaes focus on issues related to language and translation in a Europe in search of cultural and political identity.
The publication was produced with the contribution of the Regione Lazio, Direzione Cultura e Lazio Creativo, Area Servizi Culturali e Promozione della Lettura, R.L. No. 24/2019, Plan 2021.